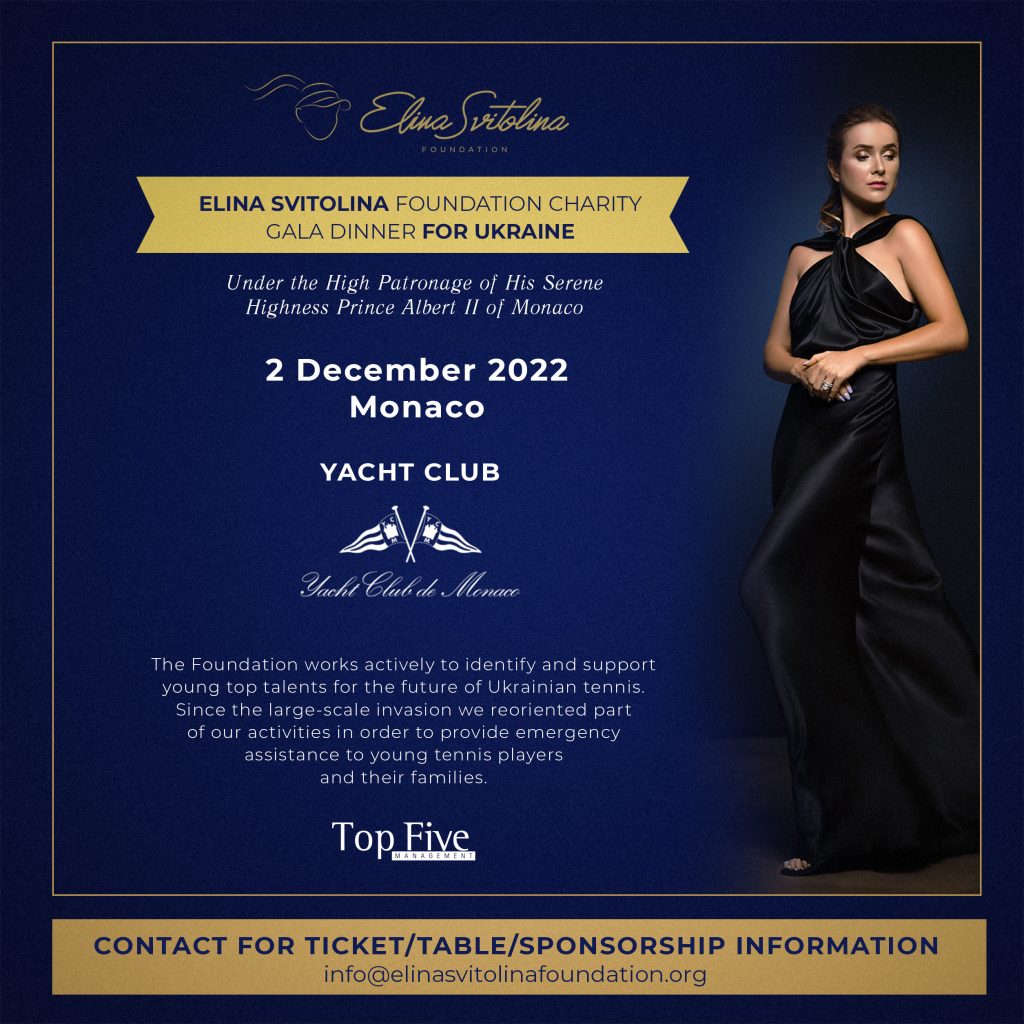 On Friday, December 2, 2022, the Elina Svitolina Foundation will hold its Annual Gala Dinner, which will be held for the first time at Monaco Yacht Club. The funds raised during this evening, placed under the High Patronage of His Serene Highness Prince Albert II of Monaco, will be used to finance the programs set up by the Foundation since 2019 including post-war Ukrainian tennis recovery program, but also to continue the logistical and material support provided to the families of beneficiaries severely impacted by the war in Ukraine.

“I am holding  the Annual Gala Dinner of my Foundation at a very difficult time for my country… For me, this is an opportunity to once again remind everyone that the war continues,” says Elina Svitolina. – My goal is to gather those who support  Ukraine and find new friends and partners  for my Foundation, which works both to support talented children and to develop tennis. The team and I firmly believe in victory and are already thinking about the post-war restoration of the sports infrastructure. Young talents who fled the country because of the war should know that they  will soon be very welcome at home.”

A private concert at the Fenice in Venice, the Finals of the 2023 Wimbledon men’s and women’s singles tournaments as well as a full experience at the Monte-Carlo Bay Hotel & Resort including dinner at Michelin-starred Blue Bay restaurant and a 2-night stay in the iconic “Nadal” Suite are all unforgettable experiences that will be offered at auction during the Annual Gala Dinner of the Elina Svitolina Foundation organized by Top Five Management and held on December 2 at the Monaco Yacht Club in the presence of the Ukrainian tennis icon, former world number 3, Olympic medalist and Ambassador of President Zelenskyy platform UNITED24, Elina Svitolina.

More than fifteen exceptional lots will be offered during the evening, which will bring together an array of international guests from the worlds of sport and entertainment, gathered for the occasion around the Ukrainian champion to support her Foundation and its actions. This evening, placed under the sign of solidarity and sport, will also be the opportunity to review the actions implemented in 2022 by the Foundation but also to meet committed athletes during a cocktail and a dinner in one of the most iconic places in the Principality of Monaco.

For any enquiry about the event: info@elinasvitolinafoundation.org